Espé, and translated by Hannah Chute 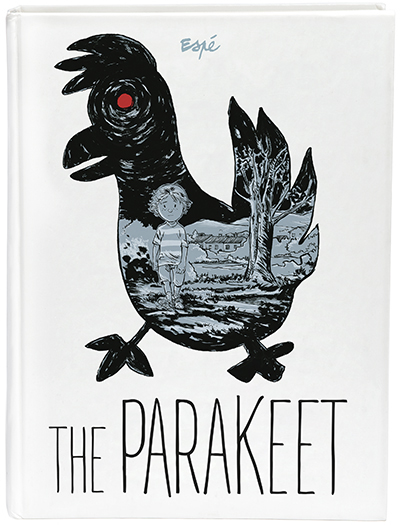 Espé, and translated by Hannah Chute

Bastien is eight years old, and his mother is ill. She often has what his father and grandparents call “episodes.” She screams and fights, scratches and spits, and has to be carted away to specialized clinics for frequent treatments. Bastien doesn’t like it when she goes, because when she comes home, she isn’t the same. She has no feelings, no desires, and not much interest in him. According to the doctors, Bastien’s mother suffers from “bipolar disorder with schizophrenic tendencies,” but he prefers to imagine her as a comic-book heroine, like Jean Grey, who may become Dark Phoenix and explode in a superhuman fury at any moment.

Based on the creator’s own childhood experiences, The Parakeet is the story of a boy whose only refuge from life’s harsh realities lies in his imagination. In his eyes, we see the confusion and heartache he feels as he watches his mother’s illness worsen and the treatments fail. Through his eyes, we see how mental illness can both tear families apart and reaffirm the bonds of love. Poignant yet playful, The Parakeet follows Bastien’s struggle to accept the mother he has while wishing for the mother he needs.

“The Parakeet is a beautiful book. Espé’s storytelling is tender and compelling, narratively and visually.”—Rachel Lindsay, author of RX: A Graphic Memoir

“A poignant and moving work of autobiographical fiction.”SensCritique

“Every once in a while, you pick up a book already knowing you’d like it, but, even then, it exceeds your expectations in the best possible ways. The Parakeet is one such book.”—Kay Sohini, Solrad

“Espé delivers many well thought-out metaphors for the different states of mental disorder haunting his protagonist.”—Oliver Ristau, The Comics Journal

Graphic novelist Espé was born Sébastien Portret in Mazamet, France. A graduate of the École des Beaux-Arts in Toulouse, he collaborated in the publication of several comics series, including Châteaux Bordeaux, and he is the creator of L’Île des Justes.