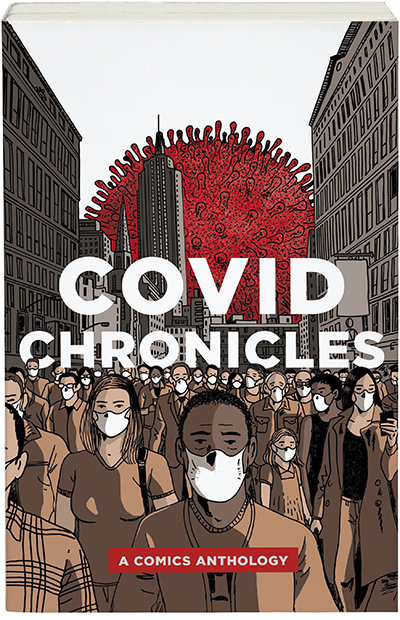 “In a diverse, impassioned book, these quick responders illustrate the impact of the pandemic with work of lasting value.”—starred review, Kirkus Reviews

In 2020, the COVID-19 pandemic brought the world to its knees. When we weren’t sheltering in place, we were advised to wear masks, wash our hands, and practice social distancing. We watched in horror as medical personnel worked around the clock to care for the sick and dying. Businesses were shuttered, travel stopped, workers were furloughed, and markets dropped. And people continued to die.

Amid all this uncertainty, writers and artists from around the world continued to create comics, commenting directly on how individuals, societies, governments, and markets reacted to the worldwide crisis. COVID Chronicles: A Comics Anthology collects more than sixty such short comics from a diverse set of creators, including indie powerhouses, mainstream artists, Ignatz and Eisner Award winners, and media cartoonists. In narrative styles ranging from realistic to fantastic, they tell stories about adjusting to working from home, homeschooling their kids, missing birthdays and weddings, and being afraid just to leave the house. They probe the failures of government leaders and the social safety net. They dig into the racial bias and systemic inequities that this pandemic helped bring to light. We see what it’s like to get the virus and live to tell about it, or to stand by helplessly as a loved one passes.

At times heartbreaking and at others hopeful and humorous, these comics express the anger, anxiety, fear, and bewilderment we feel in the era of COVID-19. Above all, they highlight the power of art and community to help us make sense of a world in crisis, reminding us that we are truly all in this together.

The comics in this collection have been generously donated by their creators. A portion of the proceeds from the sale of this volume are being donated by the publisher to the Book Industry Charitable Foundation (Binc) in support of comics shops, bookstores, and their employees who have been adversely affected by the pandemic.

“In a diverse, impassioned book, these quick responders illustrate the impact of the pandemic with work of lasting value.”—starred review, Kirkus Reviews

“Impassioned and impressive. . . . Captures the anxiety, courage, and surreality of the current era with a visceral quality that lingers.”Publishers Weekly

“As a taxonomy of the many voices around the pandemic, COVID Chronicles is a substantial and wide-ranging anthology.”—Bruno Savill de Jong, Broken Frontier

“By all counts, this is a significant and monumental work. We see where we are, where we’ve been, and where we’re headed. Each story here has something important to share and the book adds up to an authentic and valuable response to one of the greatest challenges of our lives.”Comics Grinder

“Never has the need for empathetic, well-rounded, and intelligent physicians been more crucial to the betterment of society. COVID Chronicles will be a fantastic addition to any library's medical humanities collection given its relevance to the current social, cultural, and political climate. The artists' stunning illustrations and relatable prose will at once make the reader laugh and cry, feel enraged and hopeful.”—Tenley Sablatzky, Journal of the Medical Library Association

“This collection offers unique, informative descriptions in meditative or documentary-style narratives to the global experience of living through the pandemic. It is diverse in expression and information. Graphic medicine is an impactful medium to discuss observations during global trauma and this is a unique collection.”—Suzanne Jeanette Larsen, Doody's Review Service

“Making sense of the past year is no easy task; it requires an anthropologist’s eye and a psychologist’s ear, an artist’s observation and a writer’s empathy. The complex form of comics is ideally suited to this task, and COVID Chronicles is impressive as both an archive of the new normal of COVID-19 and a provocation to never return to the old normal.”—Candida Rifkind, Winnipeg Free Press

“A broad range of voices covers pandemic experiences in every facet of our lives, from housing to mental health to historical context. Together, these stories highlight the medium’s inherent strengths in conveying our complex humanity. Essential and accessible.”—Nate Powell, artist of the March trilogy

“COVID Chronicles embodies what comics can do so well: it’s an extraordinary and diverse collection of graphic narratives that bear witness to the pandemic as it continues to rage.”—Josh Neufeld, author of A.D.: New Orleans After the Deluge

“Like the way panels and gutter space work together in a single comic, the stories in COVID Chronicles work together to link a remarkable variety of experiences from this shared pandemic while simultaneously connecting with the reader’s own life and imagination. This is the power of such volumes: to relate, to inform, to unify, and to witness. COVID Chronicles will prove to be an indispensable work of graphic medicine, a testimony to a dark but unforgettable chapter in our common history.”—A. David Lewis, author of The Lone and Level Sands

“Wonderful art often emerges from pain and its rippling effects. The virus offers this silver lining of talented folks sharing their moments from 2020's year of hell.”—Paul Levitz, author of 75 Years of DC Comics: The Art of Modern Mythmaking

Kendra Boileau is the Publisher of Graphic Mundi and the Assistant Director and Editor-in-Chief of Penn State University Press. She developed the Graphic Medicine line of graphic novels for PSU Press and went on to launch the Graphic Mundi imprint in 2021. Boileau has been a judge for the annual Lynd Ward Prize for the Best Graphic Novel, and she serves on the Lynd Ward Prize Advisory Board. Boileau is also a French-to-English translator of graphic novels.

Rich Johnson is a publishing consultant and the founder of Brick Road Media, LLC. Previously, he held leadership positions at Lion Forge Comics and DC Comics, and he was the cofounder of Yen Press. He created the sales and marketing strategy for Neil Gaiman’s Sandman: Endless Nights, the first original graphic novel to hit the New York Times Best Sellers list. In 2011, Johnson was selected as a judge for the Eisner Awards, considered by many to be the Oscars of comics.