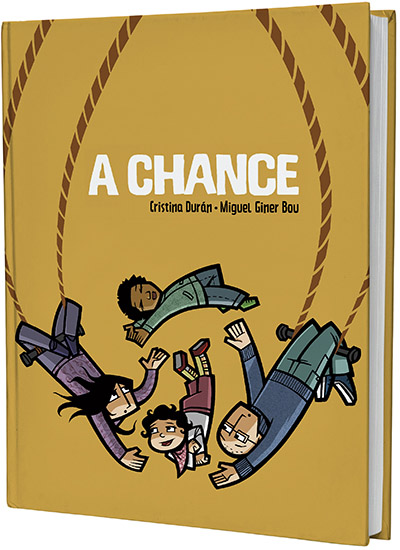 “Durán and Giner Bou depict distinct experiences in parenthood with love and charm in a graphic memoir that runs by turns from harrowing to lighthearted.”Publishers Weekly

For Cris and Miguel, creating a family will take a little luck and lots of determination. A Chance is the engrossing, heartwarming story of their struggles and triumphs.

The narrative follows Cristina Durán and Miguel Giner Bou as they rebuild and reinvent themselves after their daughter Laia is born with cerebral palsy. Hospitals, rehabilitation centers, and doctors become part of their daily routine. There is one chance in a thousand that Laia will pull through—and they hold on to that chance with tremendous strength and indomitable joy.

Years later, with the same courage and determination, Cristina and Miguel embark on the arduous process of adopting their second daughter, Selam, from Ethiopia. This time, they face a long period of training, psychological tests, interviews, and formalities before they can even pack their bags. And when they return with Selam, the challenge of reinvention awaits them yet again.

“Durán and Giner Bou depict distinct experiences in parenthood with love and charm in a graphic memoir that runs by turns from harrowing to lighthearted.”Publishers Weekly

Cristina Durán and Miguel Giner Bou are graduates of the Facultad de Bellas Artes de Valencia. They started out in animation, and in 1993 they founded their studio, LaGRUAestudio, where they work as professional illustrators and comic creators. In 2019, they were awarded Spain’s Premio Nacional del Cómic for EL DÍA 3.