Two Boys and Their Flight from the Taliban 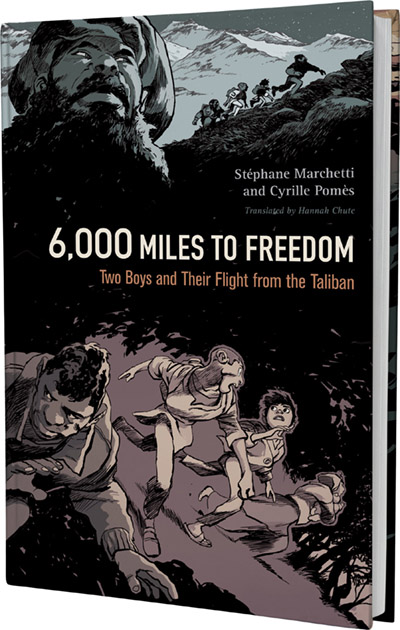 Two Boys and Their Flight from the Taliban

Two boys. One war-torn country. A world away, freedom.

Twelve-year-old Adel and his cousin Shafi try to lead a normal childhood in war-torn Afghanistan. But when Adel’s father dies, everything changes. His uncle, a religious fundamentalist, sends Adel to study at a madrasa run by militants, where he is trained as an insurgent and chosen to carry out a suicide bombing. When his moment of martyrdom arrives, Adel’s detonator fails, and he is forced to flee the country or risk being killed by the Afghan police or the Taliban themselves.

Together, Adel and Shafi set out to seek refuge in England, where Shafi’s brother now lives and where a new life awaits. With that hope, the two boys begin the perilous journey of 6,000 miles to freedom, crossing mountains on foot and squeezing into crowded trucks with other refugees. The two become separated only to find each other again in the Calais Jungle encampment, their last, hellish stop.

Based on numerous testimonies from refugee youth, this poignant, timely, and well-documented story brings to life the traumatic experiences faced by Afghani children fleeing war and poverty, as well as the isolation they often feel as refugees in the West.

Stéphane Marchetti is an author, director, and producer of documentaries. His film Rafah, chroniques d’une ville dans la bande de Gaza won the Albert Londres Prize in 2008. 6,000 Miles to Freedom is based on testimony collected in his 2017 documentary, Les enfants de la jungle.

Cyrille Pomès published his first comic book, À la lettre près, in 2005. Since then, he has collaborated with historian Jean-Pierre Filiu on Le printemps de Arabes and Le dame de Damas and with Isabelle Merlet on the prize-winning Le fils de l’Ursari, based on the novel by Xavier-Laurent Petit.