Marry Me a Little 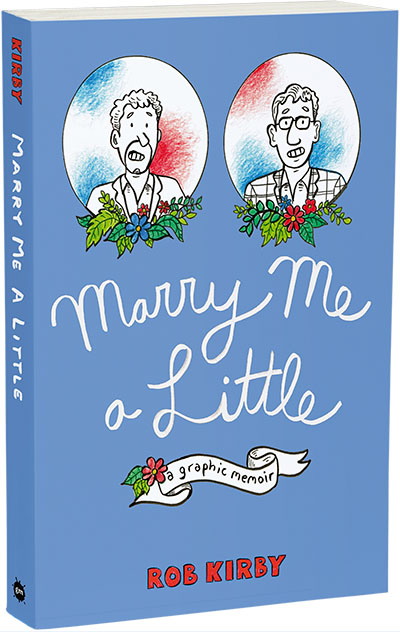 Marry Me a Little

“Marry Me a Little is a touching, human, honest, and honestly funny look at the politics, big and little, of same-sex marriage. It's addictive, gentle-spirited reading that's also tough-minded in all the right places.”—Mark Harris, author of Mike Nichols: A Life

Marriage doesn’t define a relationship. Unless you want it to.

In Marry Me a Little, Rob Kirby recounts his experience of marrying his longtime partner, John, just after same-sex marriage was legalized in Minnesota in 2013, and two years before the Supreme Court decision in Obergefell v. Hodges made same-sex marriage the law of the land. This is a personal story—about Rob’s ambivalence (if not antipathy) toward the institution of marriage, his loving relationship with John, and the life that they share together—set against the historical and political backdrop of shifting attitudes toward LGBTQ+ rights and marriage. With humor, candor, and a near-whimsical drawing style, Rob relates how he and John navigated this changing landscape, how they planned and celebrated their wedding, and how the LGBTQ+ community is now facing the very real possibility of setbacks to marriage equality.

Heartwarming, honest, and slyly humorous, Marry Me a Little is a wonderfully illustrated celebration of a romantic partnership between two men and a personal account of a momentous and historic moment in the fight for gay rights.

“Marry Me a Little is a touching, human, honest, and honestly funny look at the politics, big and little, of same-sex marriage. It's addictive, gentle-spirited reading that's also tough-minded in all the right places.”—Mark Harris, author of Mike Nichols: A Life

“Rob’s sweet and funny story captures perfectly why Minnesotans voted to reject an anti-marriage amendment, paving the way for the passage of the Freedom to Marry a few months later. Now, young people, no matter their circumstance, will grow up knowing that the most important thing in life, love, is a good thing. No fear. No shame. Love won.”—Scott Dibble, Minnesota State Senator

“I'm a reluctantly romantic queer Gen Xer who is ambivalent about the institution of marriage, so this book really spoke to me. I laughed, I cried, but most of all I really just loved it. Rob Kirby has long been one of my favorite cartoonists, and this is his finest work yet!”—MariNaomi, author and illustrator of I Thought You Loved Me

“Rob Kirby’s delightful memoir about tying the knot with his longtime partner, John, perfectly captures that uneasy relationship that so many same-sex couples had with the institution of marriage when it finally opened its arms to us. After so many years, should any of us trust what had always been a privileged place of hetero power? Kirby, an accomplished and talented cartoonist, lays bare his ambivalence in an engaging and dynamic way, bringing the reader along with him, John, and their dog Ginger as they navigate this next step to both empowerment and assimilation. As with all of Kirby’s work, an empathic warmth suffuses the book, and the profound love affair between Kirby and John is at the center of everything. As Kirby writes, and as every reader of this book will wholeheartedly agree by the end, ‘People just love love!’”—Justin Hall, editor of No Straight Lines: Four Decades of Queer Comics

“Rob Kirby is a treasure of American cartooning. In Marry Me a Little, he lulls you into satisfaction with his trademarked friendly and engaging drawing style so that you don’t see the two-by-four of his message coming to whack you upside the head. Marry Me a Little is a laugh-out-loud meditation on The Institution from all angles: gay, straight, sincere, cynical, and cockeyed. It confronts great issues of the day while allowing you to enjoy the pleasing domesticity of Kirby’s story. It’s like sitting in your dear friend’s kitchen during a snowstorm while the two of you drink coffee, eat oatmeal cookies, and solve the world’s problems. In other words, it couldn’t be more enjoyable.”—Eric Orner, author and illustrator of Smahtguy: The Life and Times of Barney Frank

Cartoonist Rob Kirby has been making comics since 1991. He is the author of Curbside Boys and the creator and editor of several anthologies, including the series THREE, for which he received the 2011 Prism Queer Press Grant, and the Ignatz Award–winning QU33R (2014).