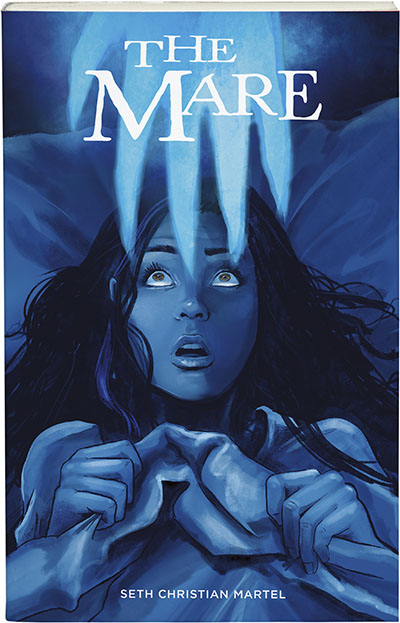 “The Mare is a beautiful graphic novel. Vivid, ominous, and compelling, and a stunning debut from Seth Christian Martel.”—Joshua Kemble, author of Jacob’s Apartment and Two Stories

While she battles her own demons during the day, Indigo’s nights are haunted by something much darker.

Everyone else may be enjoying the summer, but Indigo’s life isn’t going so well. Her dad’s marriage just ended in a very public divorce, and now he’s drinking again. Indy barely graduated from high school, she just lost her job, and she doesn’t know what to do with her life. The stress is causing her nightmarish sleep paralysis—or so she thinks.

Indy confides in her best friend, Kasia, who blames “The Mare” for her troubles—the spirit of someone wronged that saps its victim’s energy at night. It sounds crazy to Indy, but is it?

Steeped in the nostalgia of lazy summers and mixtapes, concert tickets and coffee, The Mare is a story about friends, family, and finding one’s way—with a touch of the supernatural and a powerful, surprising twist.

“The Mare is a beautiful graphic novel. Vivid, ominous, and compelling, and a stunning debut from Seth Christian Martel.”—Joshua Kemble, author of Jacob’s Apartment and Two Stories

“Martel’s art is evocative and compelling, capturing supernatural intensity alongside nuanced character expression. Their lives are all the more gripping from his economical use of colors and haunting gray washes.”—A. David Lewis, author of The Lone and Level Sands

Seth Christian Martel is a graphic designer and freelance illustrator based in the Hudson Valley. A lifetime comics fan, Seth attended the Fashion Institute of Technology and State University of New York at New Paltz. In addition to his work in graphic design, Seth has worked as a set painter and special effects makeup artist at a Hudson Valley haunted attraction. He’s a big fan of cats, especially orange ones.